In Part 1, we created a memory-optimized database, and explained the different states that CFPs can have.

In this post, we’ll take note of the changes to free space on the volumes that host our containers, before/after creating a memory-optimized table.

To begin with, we can see that the folder currently consumes 100MB of storage, because that’s how much we allocated for the MDF file when we created our database. 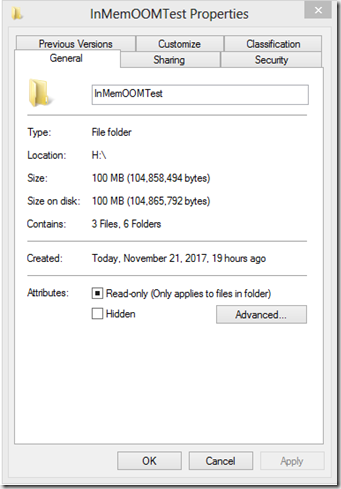 I’ve written a script that among other things, displays summary and detail information about memory-optimized databases, which can be found here. After changing the script to only give us details about the OOM_DB database, the relevant sections are listed below. In the somewhat voluminous output from the script, you can scroll down to the section entitled “’Database layout”.

We should note the following:

This information is extremely valuable when assessing the storage state of a memory-optimized database.

The containers consume 584MB and 568MB respectively (but after running these tests several times, it seems that the numbers fluctuate slightly), and all of the files in each container are “PRECREATED”. As we mentioned in Part 1, as a performance optimization, the In-Memory engine precreates files, and this has some interesting implications, which we’ll see later on.

Let’s create our table (which is specifically designed to consume a lot of memory for each row):

I ran the diagnostic script again, and now you can see that all of the data and delta files are PRECREATED, because none of them have been populated yet.

After adding 10 rows, we have:

It’s clear that before we inserted any data, we had 20 files that were in the PRECREATED state. After inserting 10 rows, we now have 18 PRECREATED files, and 2 UNDER CONSTRUCTION files, which means the In-Memory engine is populating these files, that they are “open” in terms of their CHECKPOINT status. If you don’t understand what these terms mean, please read Part 1.

But there’s one thing that doesn’t look right here: we’ve inserted data into the table, but sizeBytesUsed is still zero for the UNDER CONSTRUCTION files. Why is that?

The Microsoft documentation explains it:

“file_size_used_in_bytes: for checkpoint file pairs that are still being populated, this column will be updated after the next checkpoint.”

After executing a manual CHECKPOINT, the following image show the before/after state of our memory-optimized database. We can see the difference: we now have values for the sizeBytesUsed column for the UNDER CONSTRUCTION rows.

In Part 3, we’ll dive deeper into IOPS and free space requirements, and how to reset the database status when all volumes run out of free space.