As part of a conversation on the #sqlhelp, I was giving feedback to a member of the Microsoft Tiger team about how In-Memory OLTP might be improved. One of my responses was about implementing a hot/cold data solution, and  Adam Machanic (b|t) responded, suggesting that partitioned views might work. I had already tested partitioned views and memory-optimized tables for queries, and confirmed that it worked as expected, but I had never tested DML for this combination of features.

Based on my new testing, I can state with confidence that partitioned view support for DML with memory-optimized tables will properly handle INSERT and DELETE operations, but some UPDATE operations might fail, and that failure occurs in a most ungraceful way. After verifying that this is an issue on SQL 2016 SP1/CU3 and SQL 2017 CTP2.1, I filed this Connect item. Microsoft has confirmed this issue, but has not yet determined how it will be fixed. For example, they could decide to disallow all UPDATEs when a memory-optimized table  belongs to a partitioned view, or instead decide to support it under limited circumstances. I’ll update this post when I have more detail from Microsoft.

an UPDATE occurs to a row in a table, and the UPDATE does not change where the row would reside, i.e. does not cause it to “move” to another table, based on defined CONSTRAINTS

b. UPDATE occurs to a row in the on-disk table that causes it to move to the memory-optimized table 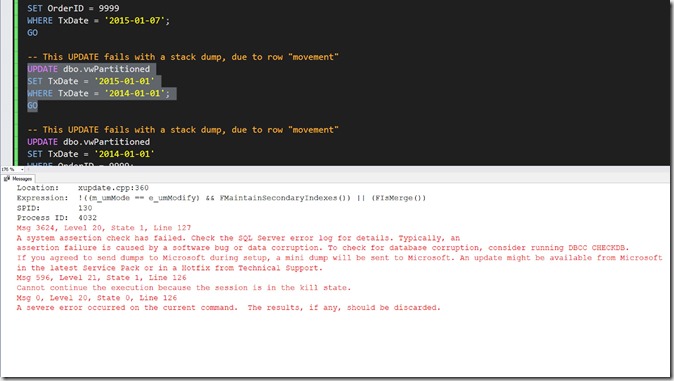 4 thoughts on “DML for memory-optimized tables in partitioned views”